Birth. June 15, 1809, Constantinople, Ottoman Empire. From a noble family. His last name is also known as Hasoun, or Hasounean, or Hassun. He is also listed as Antoine-Pierre IX Hassoun; as Antonio Pietro IX Hassun; and as Anton Petros IX Hassounian.

Education. Initial studies in Constantinople; in 1822, he went to Rome and studied at the Seminary of S. Pietro in Vaticano; and at the Pontifical Urban Athenaeum of Propaganda Fide, where he obtained a doctorate in theology in 1832.

Priesthood. Ordained, September 8, 1832. He was assigned to Smyrna, where he was placed in charge of the Armenian Catholic parish. Later, he was called to Constantinople, where he worked in several parishes and became chancellor and vicar general of the primatial see.

Episcopate. Elected titular archbishop of Anazarbo and appointed coadjutor, with right of succession, of the metropolitan and primatial see of Constantinople of the Armenians, June 7, 1842. The election was made according to a decree of the S.C. of Propaganda Fide, dated May 9, 1842, which was approved by the pope the following May 23 without the habitual consultation with the people and the clergy. Consecrated, June 19, 1842, church of the S.C. of Propaganda Fide, Rome, by Cardinal Giacomo Filippo Fransoni, prefect of the S.C. of Propaganda Fide, assisted by Ignazio Giovanni Cadolini, titular archbishop of Edessa di Osroene, secretary of the S.C. of Propaganda Fide, and by Joseph Rosati, C.M., bishop of St. Louis, Missouri, United States of America. Succeeded to the metropolitan and primatial see of Constantinople of the Armenians, August 2, 1846; as primate, he had jurisdiction over Grand Armenia, Asia Minor, the region of Constantinople and European Turkey; his elevation provoked a strong discontent in the Armenian community, which was jealous of its traditional privileges in the election of bishops. He was also civilian Armenian prelate but he renounced the title (which was a civil servant and the only official contact between the Sublime Porte and Catholics, and allowed him at the same time to combine religious power and civil power) in 1848, to avoid discord; he resumed the title in 1860. Assistant at Pontifical Throne, February 15, 1859. Elected by the Armenian Synod of Bzommar (1) patriarch of patriarch of Cilicia of the Armenians (with residence in Lebanon) on September 14, 1866. Took the name Andon Bedros IX. On July 12, 1867, by the papal bull Reversurus, the primatial see and the patriarchate were united and the patriarchate was transferred to Constantinople; the bull also amended the rules relating to the election of bishops; these decisions provoked a schism (2). On July 12, 1867, he was also granted the pallium. Participated in the First Vatican Council, 1869-1870; he was member of the Dogmatic Commission, and ranked among the supporters of the definition of papal infallibility. The excommunication pronounced by Pope Pius IX against the schismatics on June 14, 1872, produce the expulsion in July of the patriarch by the government; the patriarch sought refuge in Rome. The Sultan of Turkey, under pressure from France, recognized in 1874 the Church that had remained faithful to Rome as a different one from the schismatic Church and the patriarch was able to return to Constantinople in 1876. On April 18, 1879, the schismatics reconciled with the Holy See and, to facilitate the pacification, the patriarch was called to Rome in 1880. He was a very active pastor: he founded a seminary in Constantinople; built several churches and schools; established better relations with the civil power; in 1843, he founded the Congregation of the Armenian Sisters of the Immaculate Conception; in 1850 created six new bishoprics in the primatial province as well as a new Armenian bishopric in Persia; and encouraged missionary activity among the schismatic Armenians. His willingness to Romanize and Latinized his Church and his centralizing policy, contrary to the ancient privileges of the Armenian Church, were among the causes of the schism.

Cardinalate. Created cardinal priest in the consistory of December 13, 1880; received red hat and title of Ss. Vitale, Gervasio e Protasio, December 16, 1880. He was named member of the SS. CC. of Propaganda Fide for the Affairs of Oriental Rites, Index, Rites and Ceremonial. He resigned the patriarchate in June 1881. He contributed to the foundation of the Pontifical Armenian College, which is the Armenian seminary in Rome, located next to the church S. Nicola da Tolentino agli Orti Sallustiani and in charge of the latter. He was the first prelate of Oriental rite created cardinal since the promotion of Cardinal Bessarion (1439).

Death. February 28, 1884, at 1:00 a.m., in his residence in via degli Angeli Custodi, Rome, from a pleuropneumonia, after receiving the viaticum, the extreme unction and the apostolic blessing. Present was his secretary of 23 years, Monsignor Pasquale Rubian. Upon learning of the death of the cardinal, Patriarch Stepan Bedros X Azarian of Cilicia of the Armenians sent a telegram of condolence; and in another telegram, the patriarch, the bishops and the faithful asked that the body of the late cardinal be transferred to Constantinople; apparently, this request was never fulfilled. Exposed in the church of S. Andrea delle Fratte, Rome, on March 1, 1884; the funeral mass took place on Tuesday March 4 at 10:30 a.m. in that church and was celebrated by Vincenzo Leone Sallua, O.P., titular archbishop of Calcedonia; Cardinal Jean-Baptiste-François Pitra, bishop of Frascati, imparted the final absolution; present were Cardinals Angelo Bianchi, Lorenzo Ilarione Randi, Angelo Jacobini, Tommaso Zigliara, O.P., Edward Henry Howard of Norfolk, Giovanni Simeoni, Pietro Lasagni, Enea Sbarreti and Luigi Oreglia di Santo Stefano; as well as the ambassador of the Sultan of Turkey before Italy, Musurus Bey; and the Ottoman consul-general in Rome, Carlo Galian Effendi. The late cardinal was buried in the chapel of the Fathers Minimos of S. Francesco di Paola, Campo Verano cemetery, Rome. Other funerals were celebrated at the Pontifical Armenian College and at the Pontifical Urban Athenaeum of Propaganda Fide. There is a memorial in the right side of the chapel of Saint Gregory the Illuminator, in the Armenian church of S. Nicola da Tolentino agli Orti Sallustiani, Rome; his cardinalitial hat hangs from the ceiling of that church.

Education. Studied at the Seminary of Perugia; at the University of Perugia, where he earned a doctorate in theology on December 1, 1843; and another one in utroque iure, both canon and civil law, on January 17, 1845.

Death. November 2, 1893, after a long illness, Rome. Exposed in his title, where the funeral took place; and buried in the chapel of the S.C. of Propaganda Fide, Campo Verano cemetery, Rome.

Priesthood. Ordained (no further information found). Domestic prelate of His Holiness. He actively assisted the workers, the small artisans, those condemned to death and the youth. Privy chamberlain participantium. Master of audiences of His Holiness, March 24, 1868. Prefect of the Pontifical Household, October 1, 1875. Canon of the chapter of the patriarch Vatican basilica. Governor of the conclave of 1878.

Cardinalate. Created cardinal in the consistory of December 13, 1880 and reserved in pectore; published in the consistory of March 27, 1882; received red hat and the deaconry of S. Maria in Portico Campitelli, March 30, 1882. Grand Prior of the Sovereign Order of Jerusalem, March 4, 1885. Opted for the order of priests and title of S. Pancrazio, June 1, 1891. Prefect of the S.C. of the Reverend Fabric of Saint Peter's. Secretary of Memorandums of His Holiness, January 26, 1892. Archpriest of the Patriarchal Vatican Basilica, October 6, 1892. He was one of the pioneers of Social Catholicism in Italy; he presided over the Commission of Evening Schools and over the Commission of Roman Hospitals. Balìf of the Sovereign Military Hospitaller Order of Saint John of Jerusalem, of Rhodes and of Malta.

Death. March 9, 1894, Rome. Exposed in the church of S. Giovanni dei Fiorentini, Rome; and buried in the chapel of the Vatican chapter, Campo Verano cemetery, Rome (1).

Webgraphy. His portrait and biography, in Italian, Wikipedia; his arms engrevings and photographs, Araldica Vaticana. 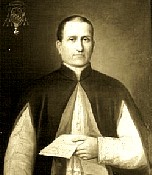 Birth. June 15, 1814, Caprarola, diocese of Civitá Castellana. From a family of the rich Roman bourgeoisie. Third of the four children of Nicola Lasagni (1766-1833), commander of the National Guard during the Roman Republic (1798-1799) and Carolina Toparin; the father had been relegated to Caprarola in 1800 by the restored papal government following his participation in the Roman Republic of 1798-1799. His older brothers, Gioacchino and Francesco, followed a legal career, while Pietro entered the ecclesiastical state. His uncle Barthelemy Lasagni (1773-1857) was judge of the imperial court of appeal in Rome (1809) and went to France when he was appointed advisor to the French Court of Cassation (1810), becoming a French citizen in 1815.

Education. In November 1828, he entered S. Salvatore Seminary of Rieti; and a few years later, he went to study at Seminario Romano, where he obtained a doctorate in canon law in May 1840. He also attended theological conferences of high level and frequented courses of jurisprudence practicing in the studio of Monsignor Lavinio De Medici Spada, vice president of the Civil Tribunal; in 1839, he obtained the license; and on May 8, 1840, he earned brilliantly the doctorate in law.

Early life. In March 1835, through the good offices of his paternal uncle, Bartolomeo, he was assigned by Prince Francesco Borghese a benefice in the Borghesian Chapel of the patriarchal Liberian basilica, Rome.

Priesthood. Ordained on December 17, 1836 in Rome; the following day he celebrated his first mass at the church of S. Apollinare. Attached to the nunciature in Paris; he was secretary of the internuncio, Monsignor A. Garibaldi, from 1842 to 1843; then auditor to Nuncio Raffaele Fornari from 1843 to 1851. In January 1846, he was commissioned to bring the red biretta to new Cardinal Joseph Bernet, archbishop of Aix; and in September of 1850, to his immediate superior, Nuncio Fornari. Privy chamberlain of His Holiness. Chamberlain of honor of His Holiness. He returned to Rome in 1851, together with his uncle, who was a high functionary of the French government, and Cardinal Fornari. Named prelate referendary in 1851. Domestic prelate of His Holiness, 1852. Member of the tribunal of the S.C. of the Sacred Consulta in 1853. Apostolic delegate in the province of Viterbo from November 5, 1853 until 1856; he paid particular attention to the socio-economic problems and public safety. Apostolic delegate in Forlì from June 20, 1856 until 1859; this was a territory traditionally difficult due to political conflicts and the maintenance of public order; the delegate acted with prudence and moderation, and refraining from resorting to repressive methods, he retired in Rimini; his conduct made Secretary of State Giacomo Antonelli send him a letter on June 21, 1859, in which the cardinal scolded him severely for his inaction in front of intimidation of a few troublemakers and for not taking any energetic measures, making use also of the troops that were under his orders to avoid the occupation of the territory by Italian troops. On his return to Rome, from February to November 1860, he was president of the Extraordinary Commission of Beneficence, charged with several social works such as assistance for the unemployed, construction of shelters for the poor and orphanages. In 1862 he was named co-visitator of the hospices of orphans. In 1863, he was included among the members of the Commission for the review of the accounts. Cleric of the Apostolic Chamber, March 17, 1863. Apostolic delegate in the province of Frosinone, June 16, 1868 until September 1870; he strongly protested the occupation of the territory he administered by the Italian troops in September 1870. In 1875, he was named secretary of the S.C. Consistorial, of the Sacred College of the Cardinals, and of the conclave.

Cardinalate. Created cardinal in the consistory of December 13, 1880 and reserved in pectore; published in the consistory of March 27, 1882; received red hat and the deaconry of S. Maria della Scala, March 30, 1882. His cardinalitial motto was Benigno numine. Member of the SS. CC. Consistorial, Bishops and Regulars, Council, Propaganda Fide, Propaganda Fide of Affairs of the Oriental Church, Ecclesiastical Immunity and Fabric of Saint Peter's Basilica. Apostolic visitor of Pia Casa dei Catecumoni. Protector of the monastery of S. Marta and of SS. Annunziata all'Arco dei Pantani. Named secretary of Memorandums of His Holiness on March 4, 1885.