Birth. May 5, 1852, Capovallazza, parish of Ussita, diocese of Norcia, Papal State. The youngest of the nine children of Bernardino Gasparri and Giovanna Sili, shepherds and owners of sheep. Received the sacrament of confirmation, July 5, 1855. Uncle of Cardinal Enrico Gasparri (1925); and of Filippo Bernardini, secretary of the Sacred Congregation for the Propagation of the Faith and titular archbishop of Antiochia in Pisidia. First cousin of Cardinal Augusto Silj (1919).

Episcopate. Elected titular archbishop of Cesarea di Palestina, January 2, 1898. Consecrated, March 6, 1898, church of Saint-Joseph des Carmes, Paris, by Cardinal François Richaud, archbishop of Paris, assisted by Louis François Sueur, archbishop of Avignon, and by Charles Turinaz, bishop of Nancy. Apostolic delegate and extraordinary envoy to Perú, Ecuador, and Bolivia, March 26, 1898 (1). Secretary of the S.C. of Extraordinary Ecclesiastical Affairs, April 23, 1901. Secretary of the Pontifical Commission for the Codification of Canon Law and of the Consulta of consultors, April 4, 1904; its relator, December 1907 to 1917; worked on this project for thirteen years. Assistant at the Pontifical Throne, May 24, 1907.

Cardinalate. Created cardinal priest in the consistory of December 16, 1907; received the red hat and the title of S. Bernardo alle Terme, December 19, 1907. Camerlengo of the Sacred College of Cardinals, May 24, 1914 until January 22, 1915. Participated in the conclave of 1914, which elected Pope Benedict XV. Secretary of State, October 13, 1914 until February 7, 1930; he negotiated with the Italian Government the Lateran Treaty and Pact. President of the Commission for the Patrimony of the Holy See, October 13, 1914. Prefect of the Apostolic Palace, October 1914 to October 1918. Opted for the title of S. Lorenzo in Lucina, January 22 1915; retained in commendam his former title until December 9, 1915. Camerlengo of Holy Roman Church, December 4, 1916 until his death. Archchancellor of the Roman University. President of the Pontifical Commission for Authentic Interpretation of the Code of Canon Law, October 16 (2), 1917. Participated in the conclave of 1922, which elected Pope Pius XI. Reappointed as secretary of State, February 6, 1922. Legate for the translation of the new statue of Our Lady of Loreto, September 1922. Prefect of the S.C. of Extraordinary Ecclesiastical Affairs, July 5, 1925. Signatory of the Lateran Pact, February 11, 1929. Papal legate to the 14th centennial celebration of the Abbey of Monte Cassino, April 15, 1929. President of the Cardinalitial Commission for the Preparatory Study of the Codification of the Oriental Canons, December 1929. Resigned the post of secretary of State, February 7, 1930.

Death. November 18, 1934, of pneumonia following influenza. Rome; shortly before, he had donated all his belongings to the S.C. of Propaganda Fide. The funeral took place on November 22, 1934 in the church of S. Ignazio, Rome; the final absolution was imparted by Cardinal Gennaro Granito Pignatelli di Belmonte, bishop of Ostia and Albano, dean of the Sacred College of Cardinals. Buried the following day in the cemetery of Ussita, in the chapel that he had had built in 1914, during a ceremony presided by his nephew, Cardinal Enrico Gasparri (3). 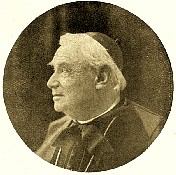 Birth. October 28, 1842, at 5 p.m., Maulévrier, diocese of Angers, France. He was the eldest of the three children of Louis-François Luçon, a modest weaver (illiterate) and Aimée Françoise Thérèse Gagnier. The other siblings were Rose Philomène, who was born in 1845 and died at 26; and Aimé François, who was born in 1849 and also died at 26.

Education. Studied at the Seminary of Angers; and later in Rome, where he obtained doctorates in theology and canon law in 1875.

Episcopate. Elected bishop of Belley, November 25, 1887. Consecrated, February 8, 1888, church of Notre Dame, Cholet, by Charles-Émile Freppel, bishop of Angers, assisted by François Grolleau, bishop of Évreaux, and by Jules Le Coq, bishop of Nantes. His episcopal motto was In fide et lenitate. Promoted to the metropolitan see of Reims, February 21, 1906.

Cardinalate. Created cardinal priest in the consistory of December 16, 1907; received the red hat and the title of S. Maria Nuova e Santa Francesca Romana, December 19, 1907. Participated in the conclave of 1914, which elected Pope Benedict XV. A hero of the First World War, while in Rome in 1914, hearing of the bombardment of Reims, he hastened home to be with his endangered parishioners. Forbidden to enter in Reims from Paris, he went by car; slept in a cellar; tended the wounded; celebrated mass wherever he could, sometimes underground; and remained there until forced by military authority to retreat from the city in April 1918. He symbolized the victims of the German attack when, in spite of the destruction of his cathedral, he remained in Reims until forced to retreat. Knight of the Légion d'honneur in 1917; promoted to officer in 1922. Participated in the conclave of 1922, which elected Pope Pius XI. Papal legate to the 50th anniversary celebration of the Catholic Institute, Paris, 1925. In 1927, he consecrated his rebuilt cathedral.

Death. May 28, 1930, of bronchial pneumonia, at 9, rue du Cardinal-de-Lorraine, Reims. To announce his death, the cathedral's chimes tolled the number of his years. Buried in the crypt of the archbishops, under the main altar of the metropolitan cathedral of Reims (1).

Birth. December 7, 1849, at 6 a.m., Seysses, archdiocese of Toulouse, France. He was the third of the five children of Joseph Andrieu, first a cooper and then owner of the business, and Jeanne Marie Sancholle, a housewife. The other siblings were Marie Marguerite Pauline (born in 1845), Dominiquette Marie (born in 1847), Jean Marie Pierre (born in 1853) and Marie Dominiquette (born in 1858). His name in the act of civil status was Jean Pierre. Received the sacrament of confirmation, 1861.

Education. Studied at the Seminary of Toulouse. Because of his status as an "ecclesiastical student", he was exempted from military service and, therefore, he did not participate in the 1870-1871 War between France and Germany.

Episcopate. Elected bishop of Marseilles, April 18, 1901. Consecrated, July 25, 1901, cathedral of Toulouse, by Jean-Augustine Germain, archbishop of Toulouse, assisted by Victor Delannoy, bishop of Aire, and by François Jauffret, bishop of Bayonne. His episcopal motto was Pax in Virtute Tua.

Death. February 15, 1935, at half past midnight, after a week of illness, in Bordeaux. Buried in the crypt of the chapel of the Sacred Heart in the metropolitan cathedral of Bordeaux. At his death, he was the oldest member of the Sacred College of Cardinals.

Birth. July 30, 1853 (1), at 6 a.m., Malo, diocese of Vicenza, Papal State. Second child of Antonio De Lai and Maria Silvagni. He was baptized two days later in the parish church of Malo. He had two sisters, Adelaide and Antonia Pietra. His last name is also listed as Dellai.

Education. Elementary and ginnasiali studies in the local parochial school or Seminarietto, under Fr. Agostino Ciscato; then, studied at the Seminary of Vicenza from 1867 to 1870; at the Pontifical Roman Seminary of S. Apollinare, Rome, from 1870 to 1876, obtaining doctorates in theology, philosophy and utroque iure, both canon and civil law; and at the "Studio" of the S.C. of the Council.

Cardinalate. Created cardinal deacon in the consistory of December 16, 1907; received the red hat and the deaconry of S. Nicola in Carcere, December 19, 1907. Secretary of S.C. Consistorial, October 20, 1908. President of one of the two subcommissions for the codification of canon law. President of the Commission for the reorganization of the Roman Curia, 1908.

Episcopate. Opted for the order of cardinal bishops and the suburbicarian see of Sabina, November 27, 1911. Consecrated, December 17, 1911, in the Sistine Chapel, Rome, by Pope Pius X, assisted by Agostino Sili, titular archbishop of Cesarea, and by Agostino Zampini, O.S.A., titular bishop of Porfireone and sacristan of His Holiness. Granted faculty to crown, in the name and with the authority of the Holy See, the image of the Virgin Mother of God, Santa Maria in Vico, diocese of Acerra, July 20, 1913. Decorated with the grand cross of the Austrian Order of Sankt Stefan, 1914. Participated in the conclave of 1914, which elected Pope Benedict XV. Vice-dean of the Sacred College of Cardinals, March 23, 1919. Papal legate to the Regional Council of Sicily, 1920. Participated in the conclave of 1922, which elected Pope Pius XI. Papal legate to the 7th National Eucharistic Congress, Genoa, August 10, 1923; to the Plenary Council of Sardinia, Oristano, April 2, 1924. Apostolic administrator of the diocese of Poggio Mirteto, August 7, 1924. Named papal legate to the opening of Holy Door, S. Paolo fuori le mura, December 18, 1924; its closing, December 14, 1925. Named bishop of Poggio Mirteto, diocese united to Sabina, on June 3, 1925. Superior general of the Scalabrinian Fathers (Missionaries of Saint Charles Borromeo).

Death. October 24, 1928, after a year and a half of illness initiated by pneumonia, Rome. Buried in Campo Verano cemetery, Rome. On March 14, 1929, his remains were transferred to Malo and buried in the Shrine of the Madonna Liberata (2).