Education. Initial studies in Nimeguen. Then, he entered the Collège de Rouen in 1815; and since November 1818, he studied in Paris, where he obtained a bachelor's degree in Letters (January 1821) and in Law (May 1821), graduating in Law (July 1822).Later, he studied at the Seminary of Strasbourg.

Early life. In 1822, he was received into the Royal Court of Paris. He was a substitute in Les Andelys (December 1822) and in Rouen (August 1823); prosecutor in Neufchâtel-en-Bray (May 1826); substitute prosecutor in Bourges (January 1827); and advocate-general in Riom (September 1827). First attorney-general of the Royal Court of Besançon (June 1829), resigned in September 1830 to enter the Church. On the advice of Louis-François-Auguste de Rohan Chabot, archbishop of Besançon, he gave up the magistrature and entered the seminary.

Death. October 28, 1883, Rouen. Exposed in the metropolitan cathedral of Rouen and buried in the chapel of Saint-Pierre-et-Saint-Paul in that cathedral in a monument with his statue kneeling down in prayer. 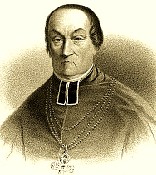 Birth. October 5, 1789, in Strzeszynek near Poznań, Poland. He came from a noble family. His parents were Stanisław Przyłuski, a landowner, and Agnieszka Wal (or Dziembowska). He had three brothers: Franciszek, Stefan and Stanisław; and seven sisters: Nepomucena, Marianna Wiktoria, Zofia, Wiktoria, Julianna, Józefata and Antonina. He was baptized on October 5, 1789. Nephew of Józef Przyłuski, S.J., prelate of the metropolitan cathedral chapter of Poznań.

Episcopate. Elected by both chapters archbishop of Gniezno and Poznań from the list of candidates approved by King Friedrich Wilhelm IV of Prussia, October 21, 1844, by twelve of the eighteen canons present; he received permission to be consecrated by a bishop and two mitered abbots, or two dignities, or two canons, January 19, 1845; the election was confirmed by the pope, January 20, 1845; he was granted the pallium on that same day. Consecrated, April 27, 1845, in the metropolitan cathedral of Poznań, by Jan Kanty Dąbrowski, titular bishop of Elenopoli in Bitinia, auxiliary of Poznań, assisted by Canons Gajenwicz of Poznań and Grzeskiewicz of Gniezno. He supported the Polish national movement fighting for the rights of Poles in the Prussian partition. Because of this, he was often in conflict with the Prussian government. In January 1846, the authorities forced him to issue a proclamation denouncing the Great Polish Uprising of 1846; but in March 1848, he stood at the head of deputation to the king on maintaining the autonomy of the Grand Duchy of Posen. In his correspondence with the authorities in Berlin, he consistently attributed the responsibility for the uprising in 1848 to the German authorities. At the same time, he urged the priests and the diocese to share the electoral and legal measures to prevent the division of the Grand Duchy. He was later in that year named honorary chairman of the Polish League. The archbishop's attempt to establish, after the revolution, a theological school with a Polish character failed because of the Prussian government. He was a signatory of the protest of the Polish bishops against the "Raumerschen Erlass " issued by Minister of Education and Ecclesiastical Affairs Karl Otto von Raumer. In 1854, he traveled to be present at the proclamation of the dogma of the Immaculate Conception by Pope Pius IX. In 1861, requested a seat in the Prussian House of Representatives. From that year, started in Berlin plans for the retirement of the archbishop from his office. To deprive Archbishop Przyłuski of his see of Gniezno and Poznań, various proposals were put forward. One of them was to move the capital from Gniezno and Poznań to Berlin. Przyłuski was to be then archbishop of Berlin. To this, however, the pope did not agree. Another proposal was to give Archbishop Przyłuski a coadjutor, who would have replaced him in the near future.

Cardinalate. Father Witold Klimkiewicz in his book Kardynał Ledóchowski na tle swej epoki 1822-1902 indicates that when Cardinal Giacomo Antonelli, secretary of State, presented the case of a possible coadjutor, Pope Pius IX declared that he had a better means to overcome the difficulties. Namely, that he may appoint the archbishop to the Sacred College of Cardinals, with permanent residence in Rome (1). On another place Fr. Klimkiewicz writes about a letter that Cardinal Antonelli had sent to Archbishop Przyłuski on January 2, 1865: That letter was not just a proposition of promotion to the cardinalate asking the prelate whether he wished the plan to be adopted, but a clear announcement that the pope had decided to nominate him cardinal and bring him to Rome; the secretary of State at the same time congratulated him for a well-deserved honor (2). At the next consistory, Archbishop Przyłuski was to be named cardinal.

Death. March 12, 1865, in Poznań. Buried in the metropolitan cathedral in Poznań. With his death, the promotion to the cardinalate became ineffective.